This HOWTO was written in 2000. Since then the prices on bare lowers has gone up a little and the 'assault weapons' ban has expired. I'd like to dedicate this page to the memory of my friend Mike Jackson who died in March 2003. His enthusiasm for the AR-15 is what convinced me to build my own and write this article.

After 3 months of waiting I finally received my M&A Parts C.A.R. 16" rifle kit. But they shipped it with the collapsible CAR stock, not the A2 stock that I ordered, so I can't finish building the rifle yet. I cannot use the CAR stock for a couple of reasons -- One is that I don't like them, and the second is that this is a Post Ban rifle, so the US Government, under the divine guidance of Bill Clinton, has deemed it to be illegal for you to put a collapsible stock on a post-ban weapon (at least until the 'Assault Weapon' ban sunsets in October 2004).

I actually bought more tools than I needed. What I really used were the roll pin punches and roll pin holders, the pivot pin install and removal tools. I also used a light hammer, block of wood, some cloth to protect the lower from scratches and a screwdriver. Some people say that you can build it without the roll pin punches and holders, but personally I wouldn't recommend it. Having the right tools for the job goes a long way towards making life easier.

Here are all the pieces and the Brownells tools 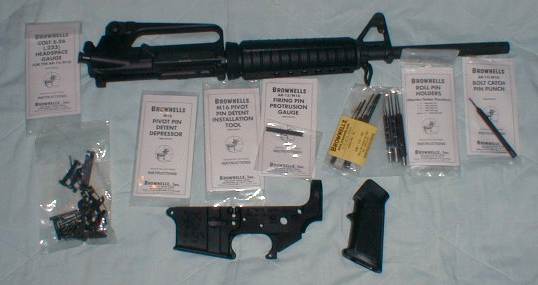 I put together the lower using the instructions from ar15.com, which is an excellent informaiton source. 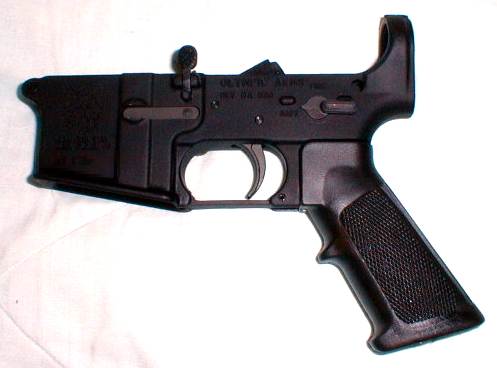 I also have a problem with the upper and lower not fitting together quite right. It seems that the lower must have a slight bump right behind where the forward assist is on the upper because I can't get the take down pin to fit without pushing them together pretty hard. I think I'll sand off the lower at that point until it fits, but I'm still thinking about it.

According to the guys over on ar15 a tight fit between the upper and lower is normal and will probably go away after I put a couple of hundred rounds through it, so I'm not going to worry about it for now.

UPDATE: Sure enough, after fitting everything together and working the takedown and pivot pins back-n-forth a few times everything seems to fit together pretty well.

Assembled rifle, waiting for its stock 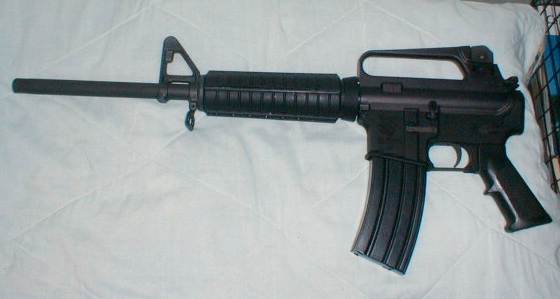 UPDATE: I got the stock (thanks to M&A Parts for getting it shipped out so quickly). I took it to the range this weekend. On the first day out I ran into magazine feed problems, the 2nd to last round wasn't feeding on 2 of my mags. The 3rd one worked fine. I used some mixed ammo I got from a friends (Winchester, Remington) and it worked great. A couple of rounds of the cheap Russian ammo I picked up at the last gunshow misfired - 4 out of about 200 rounds so far. NOTE: Do not use the cheap ammo with the lacquer finish on it (Wolf is one manufacturer of this), the finish will melt in the chamber and cause feed problems.

Assembled with A2 stock and 20rd magazine

The sights were off, it was shooting high at 25 yards, but I didn't know how to adjust the front sight, so I called it a day after firing about 100 rounds through it. On Sunday I went back, after having learned how to move the front sight up and down (use a bullet tip to depress the little pin and rotate it counter clockwise to lower the point of aim). Just by chance I got it adjusted right on. The first group on Sunday looked like the picture below! Now I just need to learn how to shoot tighter groups.

I also fixed the mag problem, I think, I bent the right lip slightly so that the base of the righthand stack was a little higher than before, so the bolt will catch and strip it off consistently. It seemed to work, I put another 200 rounds through it Sunday without a problem. 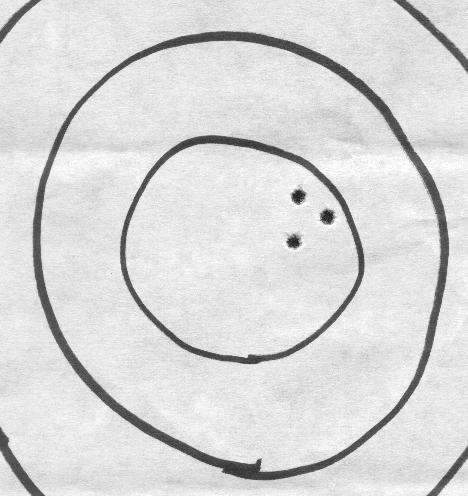 UPDATE 11/16/2002 The mags continued to plague me until the next gunshow where I picked up a bunch of military surplus mags (Universal, OKay, Colt). Those cheap steel mags are totally unreliable. I use surplus mags with metal followers and have only had problems with the 1 Colt magazine that I picked up. I haven't paid more than $15 for any of them and they all work great.

Since building this one I have built another, using a cast lower receiver from Olympic Arms. I didn't have any real problems other than the hole in the grip not lining up properly (I reamed out the grip hole and it fit). But the cast lowers just feel cheap. Their finish is rough and they feel brittle. They're probably just as good as forged, but I'll stick with the ones with a better look to them -- those cheap Plinker AR-15s that Olympic Arms is making now are really ugly, with cast upper and lower parts.

I built a 3rd from the forged lower built in this article and a flattop Olympic Arms upper that I bought at their Phoenix Rising event. It really isn't building when all you do it put a new upper on the lower, but it fit just fine and works great with a Leupould 3-9x40mm scope on it, or a Bushnell Holosight.

UPDATE 12/2018 The M&A Parts site appears to be gone, and is being used for something completely different so I have updated the links to point to Del-Ton who also sell good quality AR kits.